This unique place is a non-profit, volunteer organization. It was something I fell in love with. You might be wondering what a pioneer settlement is. To really simplify the definition for you, imagine taking a step back into late 19th century life in West Central Florida.

The Pinellas Pioneer Settlement in St. Petersburg consisted of many replica buildings of earlier settlers in the late 19th century. Things like gas stations, blacksmiths, and even an old spooky “holy house” exists on the property. The property is quite large, but not large enough to spend a whole day there.

When I first arrived on the property, I was extremely confused. There was limited parking and an extreme new, freshly painted purple building. I walked in the building expecting it to be the welcome center, but to my surprise, it was a camp with many children. After talking to the counselors, they informed me that the settlement was behind this building and this was a summer camp.

My first stop was oddly enough the “holy house.” The building was old, but there was no information on the house. In fact, the building looked more like a rotting storage unit.

Compared to the rest of the property, this wasn’t the best building on display. It was my favorite building though because it was mysterious and very intriguing. The two circles on the side of the building  have a ship on both sides of the wall. On the ships flag was a red cross. I was interested to know more so, I wanted to do some research. 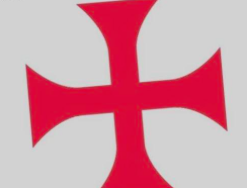 This symbol is a military medical symbol from the mid 19th century. So I am assuming the holy house is something we would consider a hospital in today’s times. It was much closer to the road than any of the other buildings, so I am assuming it was close to the road for easier access. Something else I noticed was a holy land, which is an open field with a camp fire in the middle not far from the building itself. Maybe it had multiple purposes or went through some phases.

I would recommend accomplishing the park in a circle, rather then go from one to the next. It is a small little town, but is nicely spread out. As you go through the park, there are simpler things to grab your interest. The tire swing is quite lovely and I highly recommend trying it one good time. Another example was, the tucked away vintage sign.

Some of the main buildings were the printing house (bottom left), the Brantley building (top), the can syrup shed (bottom middle), and lastly many 19th century tools (bottom right). There are many other building like these, but I can’t give away all the good buildings. You will have to experience it for yourself. Bringing friends along as well makes the experience twenty times better.